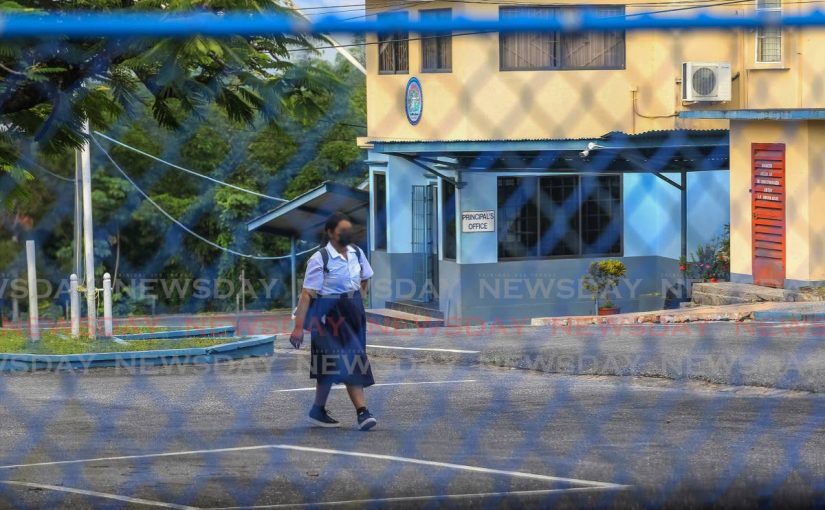 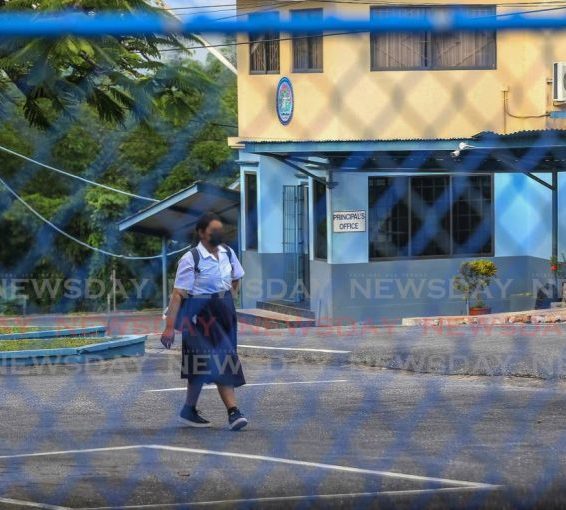 A form five student walks through the yard of Iere High School, Siparia, on Monday. – Photo by Lincoln Holder

Last Wednesday night, when the principal of Iere High School in Siparia got information that two students were primary contacts to a covid patient/relative, he said he immediately began taking steps to prevent any possible spread of the virus.

Principal Roy Nandlal said, within hours, his entire staff, many parents, and officials from the ministries of health and education and the Presbyterian Board were notified.

Speaking to Newsday at the Bayanie Street school on Monday, Nandlal confirmed that 60-plus students and four teachers had been in home-quarantine since last Thursday.

Tests later found that two of the students had covid19. The others have been screened but showed no signs of the virus.

Nandlal opted not to share the vaccination statuses of the students that tested positive.

“It (quarantining) is the responsible thing to do,” Nandlal said.

He recalled that last Wednesday at 6.50 pm, a teacher called him by phone, having received a message from one of the now-positive students.

The student said an adult female relative had tested positive for covid19 the day before. Because of that, the student said he would not be attending physical classes for the next 21 days.

That student lives in the same house with another student who also attends Iere High School.

The principal said both were in the school last week.

“On Thursday, a professional cleaning service sanitised the entire school. However, students felt insecure and did not come to school. But the teachers were kind enough to have online classes with them, and Friday also had online classes.”

Physical classes for the other students resumed on Monday.

Messages have been circulating, criticising “the principal’ accusing him of “exposing” staff to the virus.

In response, Nandlal said it was disheartening to know he liaised with the relevant stakeholders promptly. He said he was baffled about who started that rumour.

He also clarified that another staff member had been hospitalised with covid19 but that case was not related to the latest incident. Nandlal was also unwilling to share the vaccination status of the staff member.

He said the unnamed staff member, who was involved in an accident, went to seek mediation attention at the Siparia District Health Facility for injuries more than a week ago.

“Hospital staff found he had covid. The last time this person was at school physically was on October 14. That has absolutely nothing to do with this incident,” Nandlal said.

“We (school) have dedicated students and teachers here. The teachers in quarantine are having online classes for the students in quarantine. We have a rotation class system, and today we had physical classes (for students not under quarantine).”

Contacted for comment, Education Minister Dr Nyan Gadsby-Dolly said just as in February to July when schools were reopened for forms four to six students, there have been covid19 cases as well as primary contacts identified among school personnel and students since October 4.

“This is why the Education District Health Unit (EDHU) was set up in January to manage these situations, in collaboration with the county medical officer of health (CMOH) of each district,” she said.

“The guidelines contain clear instructions about how covid-related matters must be handled and escalated to the district nurses so that when positive cases or primary contacts are identified, the situation can be properly managed.”

Gadsby-Dolly said it is expected that these cases would arise, and for this reason, the EDHU was established.

“Where sanitisation of the premises is deemed necessary by the EDHU and the CMOH, this is also routinely done,” the minister said.

“In some cases, this would require school closure for a day, after which the students can be readmitted. MTS (National Maintenance Training and Security Company Ltd) provides these emergency services to the schools.”