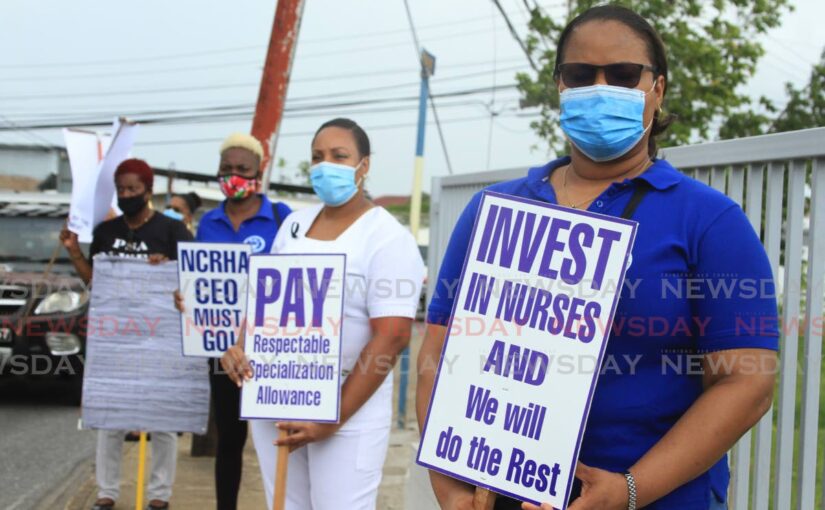 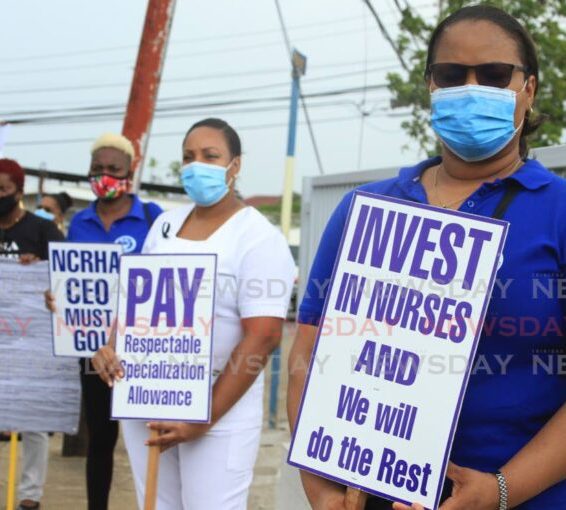 Over 100 nurses have left the healthcare system seeking employment abroad over the past year, according to second vice president of the TT Registered Nurses Association Letitia Cox.

She said recruiters, mostly from the United Kingdom, but also from Canada and the US, have been poaching nurses from TT and the Caribbean because of their excellent training, and the nurses are grabbing at the opportunity for better terms and conditions.

“There has been a drastic uptick in recruitment since the pandemic. These countries are severely short-staffed and have been recruiting nurses to empower their healthcare systems which have been overwhelmed by increased infections of covid19 patients.”

According to the association, this year alone, 48 registered nurses from the South West Regional Health Authority (SWRHA) resigned and left the country. There were 21 from the Accident and Emergency and paediatric departments of the Eric Williams Medical Sciences Complex in Mt Hope, 25 from the Port of Spain General and St Ann’s hospitals, six from the Accident and Emergency Department in Tobago, and more from other RHAs and departments.

She said there are many issues within the healthcare system that need to be addressed but were being ignored. Cox said the problem of haemorrhaging staff would continue once nurses and midwives, who have been giving of themselves selflessly for years, remain unhappy and unable to care for their family and loved ones,

She said some reliable nurses are discouraged as they are only getting short-term contracts and no job security. In addition, the Prime Minister’s December 18 announcement that public servants, including nurses, needed to be vaccinated to work or stay home without pay by mid-January has caused a lot of anxiety because most of the unvaccinated nurses were fearful.

In some RHAs, only one in two health workers are vaccinated.

“I think they would have done better with some additional counselling and persuasion rather than a strong-handed approach.

“I’m hearing the government talking about contingencies and who they are going to grab and pull staff if there is mass fallout from the furlough policy. They are speaking as though everybody could be easily replaced. But, unless they are taking nursing students, they are going to be replacing them with people who are less qualified and less experienced.

“Patients will not be getting the quality care they would normally get. And I think perhaps that may be one of the reasons a lot of people are dying of covid – because our hospitals, community centres and facilities are severely understaffed and under resources.”

Although he had no problems with the working conditions in TT, mental health nurse Darius Mollineau left the country in September to work in the UK to get further academic and professional experience.

“In Trinidad you would reach a certain level and basically that’s it, and there are only so many positions available for the numerous qualified persons in Trinidad. But abroad, there are more opportunities.”

The TT Registered Nurses Association reports that more than 100 nurses left TT for overseas since the pandemic began in 2020. – File photo/Angelo Marcelle

In TT, he was a registered mental health nurse permanently employed with the North West RHA. After doing some district health visitor training, he was given a temporary contract as an acting district nurse. He was employed with the RHA for 11 years.

He now works at a private hospital funded by the National Health Service (NHS) in Somerset.

Mollineau, 37, told Sunday Newsday he saw some advertisements on Facebook from health professional recruitment agencies and applied in December 2020. He was contacted the next day. However, TT was on lockdown at that time so he could not get all the necessary documents.

He explained that these agencies would send the relevant information to hospitals or trusts, and the facilities would interview the applicant to determine if they were suitable.

Despite the delay, he was hired and the agency assisted him in getting his work permit. They also paid for his UK nurses registration exam, his training for the exam, visa appointment, airfare, quarantine, meals, six weeks accommodation, a £2,000 welcome bonus for relocating, and his new salary is about TT$100,000 per annum more than he received in TT.

He also believes the UK’s covid19 management system was better. Although the UK has something similar to TT’s parallel health system where separate areas are set up to treat covid19 patients, there are more areas to treat different levels of illness. And there is a dedicated staff to service these areas rather than rotating people in and out of the covid19 areas.

He added that the government supplies hospital staff with covid19 rapid test kits. The staff must test themselves twice per week and they must submit the results online.

He also appreciated that the medical staff in the UK were more compliant about being vaccinated and they continually get emailed updates on the newest covid19 developments.

Mollineau said usually UK hospitals ask for at least 18 months experience but that stipulation was waived so, in 2020, when many nursing students were not getting employment in TT, a large group of newly-registered nurses who never entered the workforce went to the UK to work.

“There are also senior nurses who have like 20 years experience. That was a shock to me because at 20 years you’re on your way to retirement. But imagine being a basic staff nurse for 20 years because you can only have so many head nurses, clinical instructors, supervisors, lecturers. You’re left with a lot of qualified staff who are not utilising their skills.”

He related the story of one nurse who started as a band five level nurse, a general nursing position, and in less than two years she was promoted to a band seven nurse which is equivalent to a primary care nurse manager working in communities. He said that would probably have taken her 20 years to achieve in TT.

In addition, hospitals in the UK encourages continuous education to remain on the nursing register and once a nurse is qualified, they are promoted.

Mollineau said initially he intended to return to TT with more experience and new ideas to improve the health system at the end of his three-year contract. However, when he applied for no-pay leave he was told he had to resign even though he indicated then that he intended to work abroad and return for the benefit of the RHA.

Now that he does not have a job to return to, he plans to remain in the UK and eventually get permanent residency status there..

“I don’t intend to grow old in this cold place. I just wanted the experience and to be able to compare it with TT because I believe in nursing improvement and I wanted to give back. But now that I’m here, I might as well get as much as I can out of the system.”

Another registered nurse, who wished to remain unidentified, said she resigned from the North Central RHA in July and started working at a public hospital in Swindon, UK in October.

When she graduated and became a registered nurse in 2016 she updated her LinkedIn profile, a professional networking and career development online service, and was immediately contacted by numerous recruiters in the UK.

At the time she was not interested in leaving the country and worked for the NCRHA from 2017 to 2021, first as a surgical nurse and then as a nurse on the ophthalmology ward.

“Then, as I continued my career at North Central (RHA) I realised even if you apply for positions, they weren’t sending anyone from the region to do the necessary courses.”

She also did extra duties in paediatric emergency and requested to be transferred there but it was not granted. So, not only was she not allowed to access more training or gain more experience in another department, she was also on a temporary contract and therefore had no benefits.

She said there were many times she was the only nurse working on a ward, when a nurse should never be on a ward by herself. She recalled one time she and a patient care assistant (PCA), who is not licensed to perform medical duties, had to care for 24 patients.

“There was a night I was working with a PCA distributing medicine room by room. When I reached the last room, a lady was crashing (having a sudden adverse change in health). Thankfully, at the same time I was going to call for assistance, the manager came in and was able to help. If she didn’t come in at that point, what would have been my situation? That is jeopardising the patients’ lives and my licence.

“At the end of the day it just wasn’t making sense.”

Two of her cousins who were nurses had left TT to work in the UK and they encouraged her to leave the country. Eventually she decided moving would be better for her and her family.

At the hospital she works for in Swindon there is a senior nurse, two registered nurses, and two support staff in an 18-bed area so they are better able to cater to the needs of patients.

In TT, she worked a 40-hour week while in Swindon she works for 37 and a half hours a week for three days with four days off so she has the opportunity to do extra duties and make overtime. And although she is on a three-year contract, it is a permanent position complete with vacation, benefits, gratuities and pension.

She is also impressed with the cleanliness of the wards, the response of the doctors in emergencies, the hospital food, and the staff training.

“Since I’ve come I’ve had mandatory training to do online. And they are going to train us to do IV cannulas, to take blood and all of the things that we would have to pay for ourselves if we wanted training in Trinidad.

“I intend to stay here. Even my daughter who is doing nursing in Trinidad and is in her second year, she will be following me here after she does a few years of service.”

Her husband and other two children will move to Swindon to be with her next year.